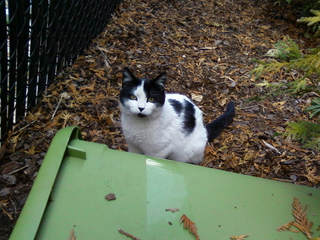 You may have seen free-roaming cats in your area and wondered who they belong to. Although some people refer to them as "feral" cats, they are increasing being referred to as "community" cats because not all of them are actually feral and some of them are just pets who are lost. (For purposes of this page, the phrases "free-roaming" and "community" are used interchangeably.)

A "feral" cat is a cat who has reverted in some degree to a wild state or who was born outside and has never been socialized to people. They originate from former domestic cats who were lost or abandoned and then learned to live outdoors or in environments involving little human contact, such as warehouses, factories or abandoned buildings. In most cases, feral cats are not completely wild because they still depend on people for their food source, whether it's a caretaker who comes by once or twice a day, a dumpster outside a restaurant or garbage cans. Relatively few feral cats subsist only by hunting.

Free-roaming cats often live in groups called colonies. The size of a colony depends on the number of resources available. A colony can range in size from a few cats to dozens of cats. In many cases, the colony is a mix of cats who are not socialized to people and former pets who are lost and have joined the colony in order to share the resources of shelter, water and food.  It is not uncommon to find completely social cats living in a colony who act feral prior to being trapped but then are completely docile once trapped. It is also not uncommon to find injured or sick cats in a colony who have been attracted by food resources in their attempts to survive. Seriously injured cats (like those who have been hit by cars) often would not survive but for efforts designed to help cats who are not social to people.

How to you tell the difference between a feral cat and one who may be social to people?  You can ordinarily do so simply by observing body language and behavior.  A stray cat which may be social to people will often approach people, houses, porches and cars, whereas a feral cat will not approach people and will seek out places to hide.  A  stray cat might walk or move much like a house cat with his or her tail in the air, whereas a feral cat may crawl, crouch or stay low to the ground and protect his or her body with the tail.  A stray cat may look at you, blink, make eye contact or even vocalize near you, whereas a feral cat is unlikely to make eye contact or vocalize at all.

Studies have shown that Trap-Neuter-Return, commonly referred to as "TNR," is the only method proven to be humane and effective at controlling community cat population growth. Using this technique, all the cats in a colony are trapped, neutered (or spayed), vaccinated and then returned to their territory where caretakers provide them with regular food and shelter. Young kittens and friendly adults are placed in foster care and eventually adopted out to good homes. TNR stabilizes the size of the colony by eliminating new litters. The nuisance behavior often associated with feral cats is dramatically reduced, including the yowling and fighting that come with mating activity and the odor of unneutered males spraying to mark their territory.